Quartzite is a trend thanks to the chromatic and visual diversity it offers as well as thanks to its general visual perception.

Similar, but not identical to the aesthetics of marble, quartzite is a metamorphic rock composed mainly of quartz. Some the quartzite slabs are opaque, others are translucent, and others again combine both characteristics in a single slab or section.

Quartzite is a trend not only because of its spectacular beauty. This natural stone has indices of resistance to abrasion, stains, and chemical agents which are similar to artificial porcelain. That is why, in addition to being a beautiful natural material for covering rooms, they also perform excellently on worktops.

The image at the top of this post shows a worktop in Macaubas White. It is a beautiful off-white quartzite. It presents light longitudinal glazes in ivory tones, and thin linear gray streaks go along with a warm and luminous background.

Above these lines, we see a Taj Mahal Sensa countertop, an elegant light beige quartzite. It has a base of faint cream tones and is furrowed by numerous linear gray streaks of varying intensity.

This bathroom features a prominent wall of Macaubas Blue, a vibrant blue quartzite that ranges from light blue to cobalt tones. Its thick veins are glacial white and occasionally incorporate some small orange striations.

The two boards of Macaubas Blue were unfolded to take advantage of the aesthetic continuation of the vein.

This example explains why quartzite is a trend. In the image, we see how the designer used the Patagonia stone for the prominent wall and the counter.

Patagonia is a beige quartzite with a fragmented appearance through which a burst of thousands of black, grey and ochre portions are spread.

To Patagonia’s extraordinary capacity to create book-match compositions, we must add its translucent character, which enables it to house spectacular backlights.

We end our tour in this bathroom covered by Red Revolution, a semiprecious red quartzite. Among its wide range of veins, the white, black, grey, and orange ones stand out. It is a natural stone ideal for highlighting some color points in environments where white predominates.

If you want to know more reasons why quartzite is a trend, visit our collection or contact us.

Our blog specialised in marble during 2022 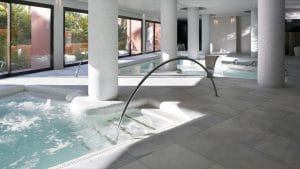 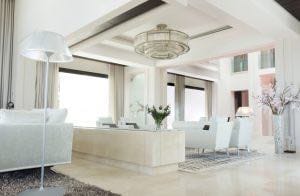